Each object can have also an alternative state in addition to its normal state. By navigation between these two states object animations are created. The object may move, resize, rotate or change the density or orientation in space. Animations can be automatic when an object appears or it is controlled with push buttons.

If the object is set to automatic start, then the animation starts when displayed:

Animations can also be automatically played back at the moment when the object disappears (the reader goes to another page, moves and switches the variable object.

Select the object (or group of objects) and press 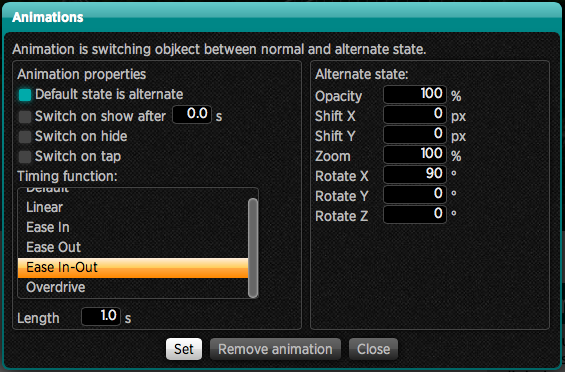 Set the animation properties on the left side of the window:

You can also set the object timing i.e. how it will move with time:

The last option is to set the animation length in seconds. If you enter 0, then the object will not animate at all, but goes immediately from one state to another.

In the right part of the window you may then set what will be the alternative state of the object:

Press the button Remove animation to remove the animation.

Hint: You may control animated object by using the On tap command which acts as a button.