Objects can be logically grouped into layers. The layers have no effect on the appearance of the article (nor in the preview, or when publishing) and serve exclusively to facilitate the work and orientation in the editor.

Each article (specifically article layout) includes a basic layer called “Background”, in which all objects are commonly found. If you create a new layer (Layer 1 for example), you can make assign some objects to this layer. The layers can be then simply hidden and shown.

Hint: Assume a normal article, that contains within the Background layer a text, title, image, and also buttons that bring up variable object. This variable object is placed across the entire page and assigned to Layer 1. Variable object thus overlaps everything beneath him, so it is not possible to work with other objects on the page. Hiding a Layer 1 enables you to easily access these objects.

Module for working with layers is visible only if there are no selected objects on the page. The layer which is active shows arrow next to it. In this layer a newly drawn objects will be created.

Icon + creates a new layer. Icon X deletes the selected layer – all objects belonging to this layer will be assigned to the base layer Background. No objects will be deleted. Background layer cannot be deleted.

Check boxes next to layer names indicate which objects will be visible.

Each layer has a specific color for object frames. Overview of objects and their assignment to layers is best to see when displaying frames (option Show object borders, shortcut key W).

Each object that lies within the page can be assigned to a layer. Just mark it on the left band and choose the layer. New objects are placed in the currently active layer (marked with arrow). 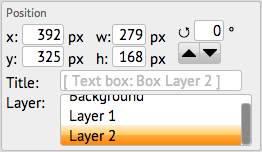