When you hold down the Shift key, you can select several objects on the page. On the feature bar the features Group button is available

, by which you can save the selected objects in one group. You may also use the keyboard shortcut Ctrl + G (for Windows) or -Cmd + G* (for OS X). With such group you may further work as with any ordinary object, among the other things, you may also set the color, edge, saturation or On tap actions.

If you want to make editions within a group, double-click on it. A group frame is then consequently marked with dotted line and you can further work with objects belonging to the group. Surrounding objects will become partially translucent then. You may exit the group by clicking the arrow on the information group bar, or by pressing the Esc key.

In the following figure the frames A and B are grouped, while C does not belong to the group. Once you double-click a group, the C frame will fade out and you can work freely with the A and B frames: 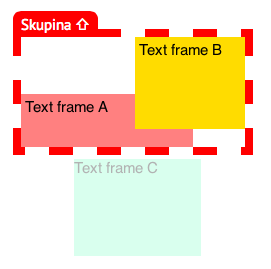 If you have selected (but did not open) a group, it can be ungrouped again into individual objects with the Split button (

). Relevant keyboard shortcuts are Ctrl + Shift + G (Windows), Cmd + Shift + G (OS X). Each group may contain objects larger than itself, respectively by group size reduction the objects inside will not shrink, but will be cropped, hidden beyond the edge. This can be achieved with scrolling objects. But first it is necessary to say in which direction the group should scroll:

Changing the size of objects within the group

When you change the group size, no resizing of grouped objects occurs. However, if you hold down the Ctrl key when dragging the mouse the size of objects within the group is recalculated. During the mouse drag an image preview is immediately displayed, which may distort the fonts, etc. When you release the mouse the real recalculation of size will take place and fonts will be displayed in normal way again.

Note.: It is not possible to change the font size in this way.